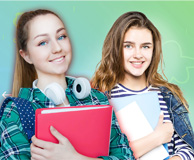 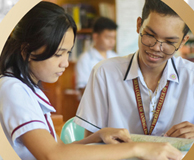 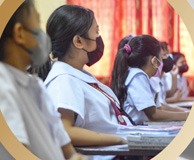 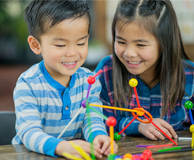 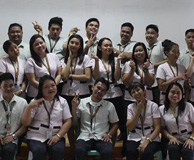 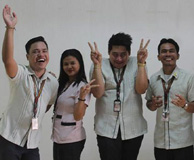 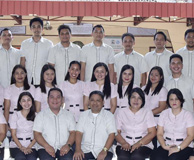 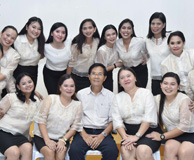 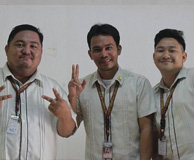 For Old Student and Returnee 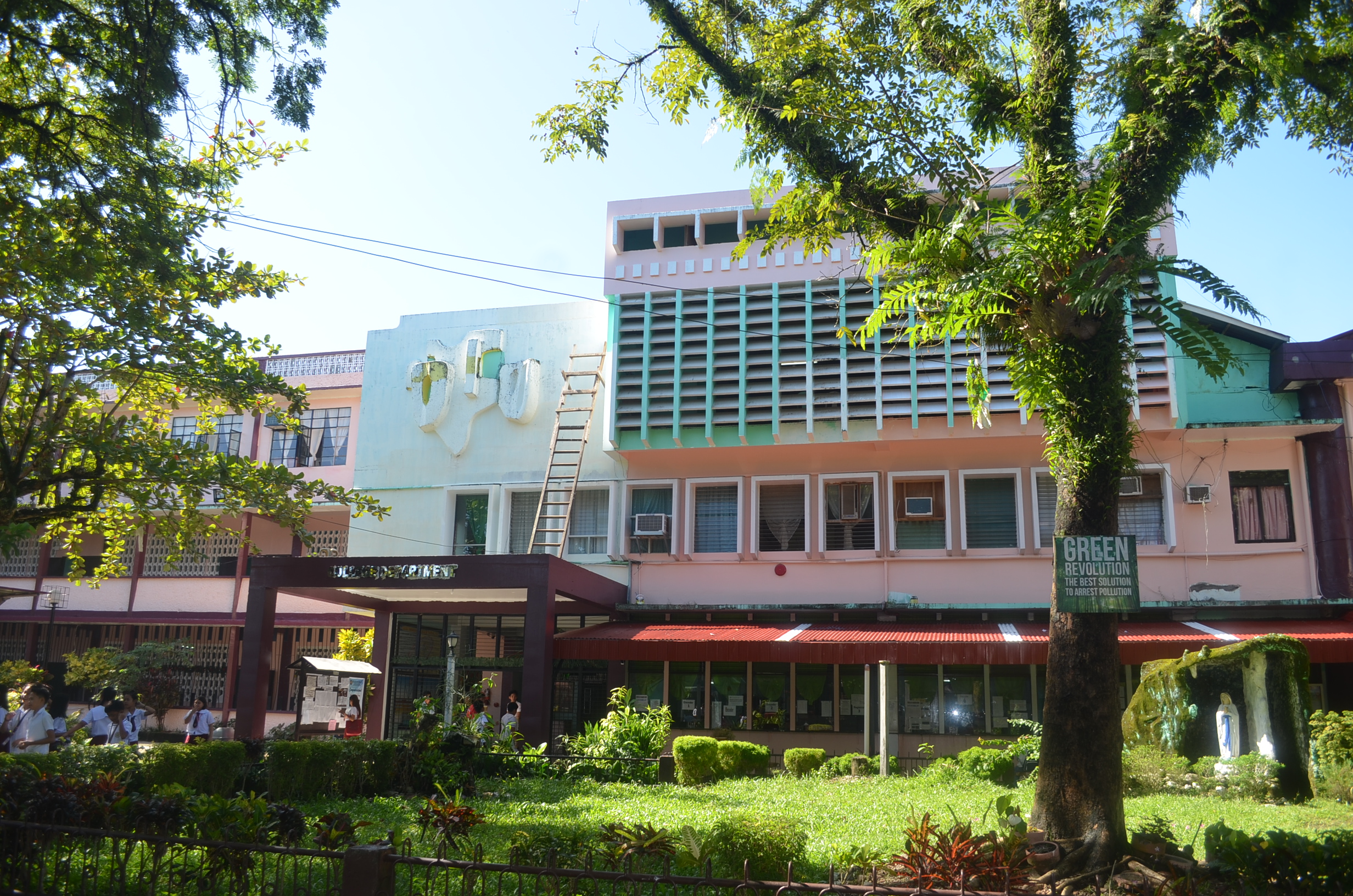 Service-Transformation-Commitment… These are the core values that Saint Theresa College is proud of through the years of her existence and mission in the Diocese of Tandag. Through the years, she has unfailingly played a vital role in providing a true and meaningful Christian education -an education geared towards the total development of man.

Major challenges, pressures and all sorts of social societal problems have tried to weaken her very foundation, however, through the spiritual guidance and inspiration of Saint Theresa College has withstood those oddities until at present she stands firmly as a catholic instruction of learning fully aware of her greatest mission – Christian education.

At first, Saint Theresa College of Tandag, Inc. was only a “dream” among the Tandaganon parishioners, which later became a reality.

In 1912-1916, Reverend Father Walter Panis, MSC, with the cooperation of early Tandaganons, established a parochial school. Two classrooms were provided under the sturdy Spanish-built convent where a Cartilla class and the combined Grades I and II classes were conducted.

Five years after, in March 1917, Father Adriano Muskens took over the management of the parish and its parochial school. From 1917 – 1925, the parochial school continuously operated until it was named St. Theresa School in honor of St. Therese of the Child Jesus, the youngest canonized Saint. During those years, the first elementary school building was constructed and completed to accommodate the increasing number of school population.

In 1925, Fr. John Olaerts, another MSC priest, arrived Tandag and took over the administration of St. Theresa School. The late Governor Adela Serra Ty was among its first students and the late Rev. Fr. Pastor Bangoy was the first graduate in 1929.

Rev. Fr. Nicasio Jansen, administered the school from 1940 – 1959. Six years after the liberation, he initiated the opening of the college department. Two courses were offered namely: the Elementary Teacher’s Certificate and the Liberal Arts under the supervision of the late Mr. & Mrs. Benito Versoza, Sr.

From 1959 -1966, Rev. Fr. Luis Boeren, the parish priest of Tandag, re-established the college in 1962 and constructed the St. Theresa College building which is at present the high school building. Through him, St. Theresa School was named “Saint Theresa College” by virtue of a resolution passed and approved by the Board of Trustees and confirmed by the Director of Private Schools on August 2, 1963. The Mary Ann Wing, an extension of the parish/convent before was added due to the growing number of college population.

Rev. Fr. Jose Van den Berg took over the parish and the helm of Saint Theresa College with five (5) Missionary Sisters of Mary (MSM) from 1966 to 1972. Through his untiring efforts to promote the college throughout Mindanao, particularly in Surigao del Sur, he initiated the construction and completion of the three-storey science building and the main college building.

Stream of remarkable achievements and the expansion of the educational services of Saint Theresa College have been undertaken by the deserving and service-oriented Filipino priest-directors from 1972 to the present.

Msgr. Daniel B. Ortega, a native of Cantilan took over the administration of Saint Theresa College on January 8, 1972. He was the first Filipino Diocesan Clergy that became a school director. He continued the work of his predecessors. He paid the loan from the Dutch Government and gave a lot of improvements to the physical plant. The most important thing he did was the STC faculty development program, through the study-now-pay-later scheme to the faculty members. He opened the graduate school in 1976. The full swing implementation of the Graduate Program took effect during the administration of Rev. Fr. Virgilio Chagas. He pursued what has been started by Msgr. Ortega. Rev. Fr. Efren E. Rivas, Jr. took over the STC administration and continued the work of his predecessors. He upgraded the educational facilities and strengthened the faculty line-up of Saint Theresa College through a well-meaning faculty development program. Through the direction of Rev. Fr. Arturo P. Langit, the first STC President and Vicar General of Tandag Diocese with the help of Sr. Marie Gonzague Maquiling, SPC, first Diocesan Superintendent of Tandag Diocesan School, Saint Theresa College Graduate School improved a lot. It graduated with a number of Masters in Education majors in Educational Management and in Guidance and Counseling.

Aside from the graduate programs, the school also offered its flagship programs, namely: General Radio & Communication Operators Course (GRCO), Electronics, and Computer Science. Cost cutting measures on the school's expenditures were implemented and almost all of the financial obligations of the school were settled. The Diamond Hall was constructed out of the fund raising activities in partnership with the Parents and Teachers Association. Conceptualization of a new 4-storey high school building was realized. Building plans were made and fund sourcing from foreign and local donors started. STC celebrated its solemn and grand Diamond Jubilee in 1991.

Rev. Fr. Florio R. Falcon became the second STC president in1995. The following were his accomplishments: (1) continuing faculty development for masteral and doctoral studies funded by Fund for Assistance to Private Education (FAPE); (2) acquisition of computer units and photocopying machines, (3) repair of the high school building, (4) air-conditioned computer rooms, and (5) realization of a Million Peso Grant from Kinder Mission-Germany for the construction of a new high school building.

Rev. Fr. Carlos P. Bautista came as the third STC President in 2004. In his administration, the STC’s Financial System has very satisfactorily improved. The different income-generating projects such as the printing press; the computer sales, the auto repair shop; the canteen and its catering services; the mini-hotel for HRM students; the bookstore; the badminton courts, the garments and tailoring services and the piggery were all initiated by Fr. Bautista in conformity with CHED and CEAP’s thrusts to augment the income of private schools and not to rely solely on its tuition fees. The IGPs greatly contribute to the financial stability of the school.

Recent tangible projects of the school include: the Php5M Covered Court, a big venue for STC’s school activities, parochial and diocesan-wide activities, the first of which was the 2-day Diocesan Youth Day celebration in December 2007.

Multimedia equipment, computers and other school facilities are regularly upgraded for quality service. Air-conditioned computer laboratories with Internet connection are provided for the elementary, high school and college departments. The Internet café was renovated and widened to answer the academic and research needs of the students. Likewise, all offices are equipped with computer units and also internet connected.

Another strong pillar for effective partnership towards the realization of the school’s vision and mission is the organization of the Parents-Teachers’ Confederation in the College Department. Parents have been actively involved in the programs and activities designed to promote students’ welfare in the school.

In addition to these developments, employees’ benefits and salaries are given foremost priority and in strict compliance with the mandate of the law. Remittances to SSS, Pag-ibig, Philhealth and PERAA are made promptly and updated. On-going faculty development programs and research activities are periodically conducted to enhance instruction.

A first revisit of the College curriculum was done in 2006. CHED-CARAGA’s top officials were in full force facilitating major enhancements of the curriculum. New curricular programs are offered, such as BS in Accountancy, BS in Public Administration, BS in Accounting Technology and some two-year courses. Regular visits of the Regional Quality Assurance Team (RQAT) since 2006 bear positive results.

June – September 2011, Rev. Fr. Cesar H. Reyes was installed as the 4th President of Saint Theresa College. Although short-lived due to his illness and death in September of the same year, his administration instituted significant reforms in the financial operation of the school and its records system.

2011-2012, Rev. Msgr. Arturo P. Langit took over the management for more than a year. He pursued the implementation of the relevant reforms/innovations for the upkeep of the school’s general operation system in accordance with the mandates of the CHED and the thrusts of Tandag Diocese as well. He gave birth to Saint Theresa Center for Ecology, Networking and Transformative Educational Research (STCENTER) a major partner of STC’s Research Development and Community Extension Services whose flagship initiatives focused on the Police Enhancement Training course on ethics and morality, language proficiency, investigative reporting, police responsibilities and other related topics in February 2015.

2013 to 2021, the reins of Rev. Fr. Sedronico M. De Los Santos, Jr. as the 5th School President commenced in November 2013. With his potent drive for STC’s educational excellence as the school nears its Centenary Celebration in October 2016, he has considerably made his administration’s take off by zeroing-in on the strengthening of the on-going academic programs and crafting of additional circular offerings that are geared to boost STC’s academic potentials and essentials to meet the global educational needs of both the internal and external stakeholders of the school.

Equipped with the needed curricular requirement in meeting the standards set by the Commission on Higher Education (CHED), the Department of Education (DepEd) and the Technical-Vocational Skills Development Authority (TESDA), STC successfully facilitated its application process for the following curricular starting from Academic year 2013 with implementation and the granting of government permit and recognition in 2017. These are the College of Criminology, Tourism, the K-12 Senior High School and the Technical-Vocational Livelihood (TVL) programs all assessed as NC II namely: Food and Beverages Servicing, Housekeeping, Servicing, Front Office Servicing, Electrical Installation and Maintenance, Refrigeration, and Air-conditioning Services (DOM-RAC) and Driving in 2015.

The offering of these relevant programs has eventually attracted students from within and outside Tandag community thus contributing to the two-year consecutive growth of STC populace since 2014. Hiring of highly qualified administrators, teachers, and staff to fortify the programs ensued to assure the clientele of STC’s quality education.

As the school relentlessly advances in strengthening and deepening its commitment to the spiritual, academic and cultural formation efforts for student’s integral development, it also intensifies its efforts to stimulate students’ interest for physical and sports development. True to its objectives, STC prides over its students-athletes’ garnering prestigious awards as champion in ball games contested in the PRISAA competitions from regional to national level, University Games and the CEAP Games, Mindanao-wide. Holistic development of man is STC’s overriding concern.

Attaining its prestige for educational excellence in this part of CARAGA Region, STC is heaven-bent in pursuing its efforts for accreditation for employing back the group of full-fledged masteral and doctorate degree STC administrators and faculty – retirees. Adding to the power house of instruction, they are collaboratively working with the current school instructional force leading to successful Consultancy Visit to STC by the PACUCOA team in April 2015, the Preliminary Survey Visit on September 22-24 and October 6-8, 2016 for the eight (8) circular programs namely: College of Arts and Sciences, College of Teacher Education, College of Business and Management Education, Hotel and Restaurant Management, College of Information Technology, College of Accountancy and the Graduate School for its MAED and MBA.

With the stream of development programs in academics and infrastructures, STC triumphantly celebrated its Centenary founding anniversary on September 29 – October 3, 2016 with the theme: STC On Its 100 Years: Harvests, Celebrations and Thanksgiving.

We provide academic and spiritual education. "The Theresian"